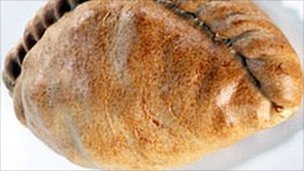 Most food and drink is
zero-rated, but takeaway food sold to be eaten hot is subject to VAT at
20%

The plight of the humble pasty has
been raised in the House of Commons after the chancellor announced plans to slap
VAT on the snack.

Mid Cornwall MP Stephen Gilbert said the pasty was “a staple, hearty meal”
which brought millions of pounds into his county and must be protected.

His colleague Andrew George said those in Cornwall would “be fighting them on
the beaches” to block any “pasty tax”.

VAT, currently at 20%, is not charged on most food and drink – such are
described as zero-rated.

It is payable on takeaway food sold to be eaten hot, but baked goods which
are put on display warm and subsequently cool down are also zero-rated.

The government says some retailers and bakeries have argued their food is
sold hot to improve its appearance, or to comply with health and safety
regulations – not for consumption that way – and therefore should not attract VAT.

We use cookies on our website. You can manage these via your browser settings at any time Find out more.